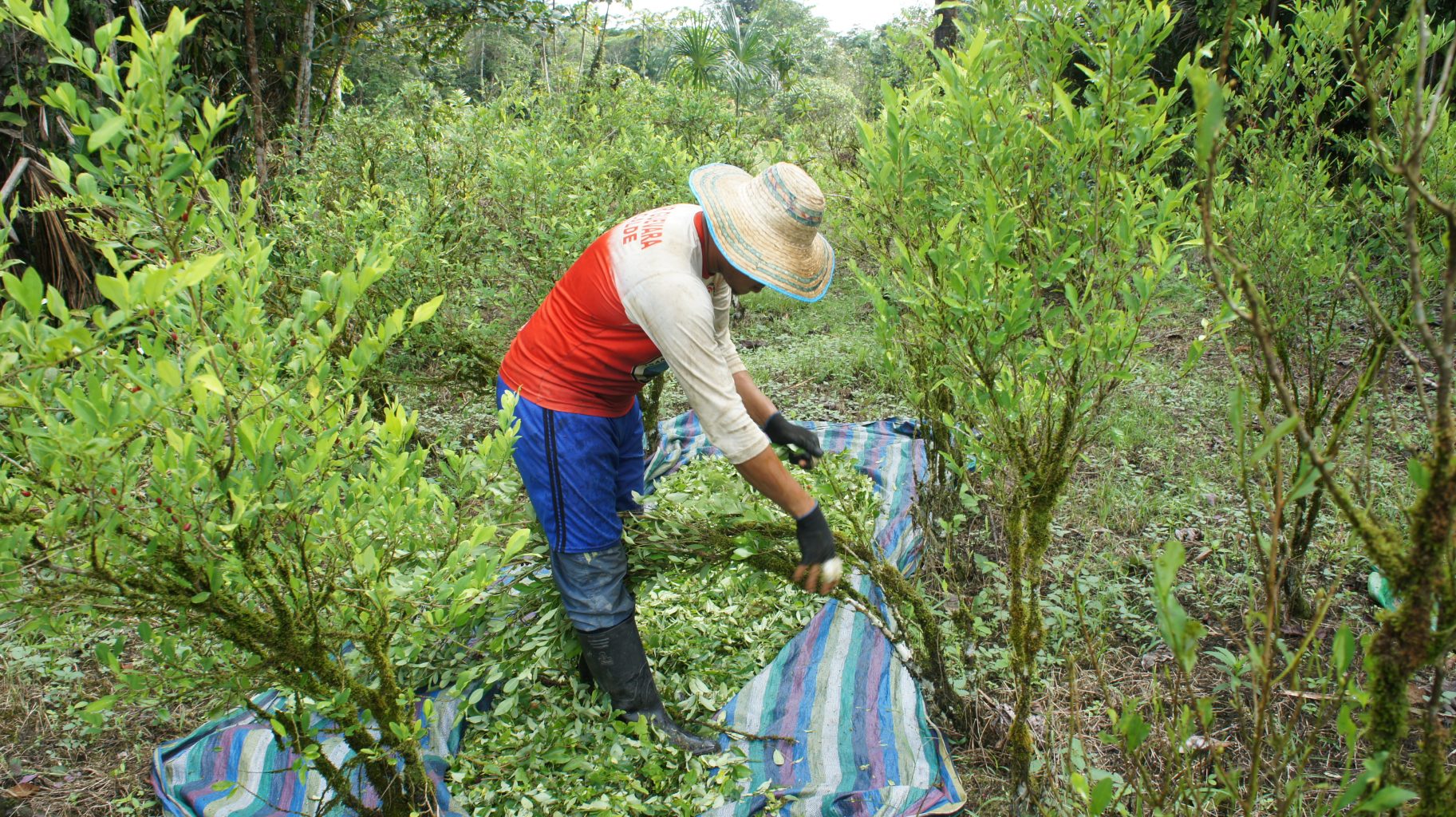 In 2020, 48% of illicit crops in Colombia were in special management zones (SMZ) or areas that are important for forest and biodiversity conservation: 20% in forest reserves, 4% in national protected areas, 8% in indigenous reserves or resguardos, and 15.5% in Afro-Colombian collective lands (UNODC, 2021).  Although academic literature has shown that coca crops are not the main direct driver of deforestation in Colombia (Erasso & Vélez, 2020; Brombacher, Garzón & Vélez, 2021), coca crops are expanding in strategic environmental and conservation areas. This is problematic for illicit crop substitution efforts. Yet the design and implementation of the government’s National Illicit Crops Substitution Programme (PNIS) has given little consideration to a differential approach, in ethnic or environmental terms.

PNIS implementation started in 2017, as part of the Peace Agreement between the Colombian State and former guerrilla FARC, but it was not until 2019-2020 that there were guidelines for implementation in national protected areas and forest reserves. These guidelines include recommendations on voluntary and collective conservation or restoration agreements; conservation incentives such as bi-monthly remuneration for agreed restoration and conservation activities; sustainable production systems; and technical assistance for capacity building.

The government has also recently developed guidelines to include ethnic communities in the programme, but these are subject to prior consultation and have not yet been implemented with former programme beneficiaries. As illustrated by our case studies in Putumayo and Guaviare, new guidelines incrementally increased mistrust and conflict as the PNIS did not consider or solve land-use overlap conflicts or land tenure disputes between communities with different ethnic backgrounds before agreements were signed.

Currently, 20% of PNIS households are in SMZ – in national protected areas or forest reserves (7.2%) and Afro-collective territories or indigenous reserves (13.6%). However, in the latter case, these are not necessarily ethnic households, which creates tensions between communities. Beyond environmental concerns, PNIS households are also poor: 56% of households in national protected areas and forest reserves, 51.1% in Afro-collective territories, and 53.4% in indigenous reserves live in multidimensional poverty. Hence, government interventions and PNIS need to consider not only environmental dimensions, but should also include productive alternatives designed to simultaneously conserve sensitive ecosystems and improve quality of life.

To explore these issues, we are studying the challenges of implementing the PNIS in indigenous or forest reserve areas in Putumayo and Guaviare in the south of Colombia (see Map 1), using social cartography workshops and semi-structured interviews.

From this work we have identified three main challenges for the implementation of crop substitution programmes in SMZs.

In some cases, peasants signed crop substitution agreements, eradicated coca crops and received immediate food security payments, but before receiving the subsidy to implement a productive project, they were suspended from the PNIS because their plots of land were located within an indigenous reserve (see maps 2 and 3). In other cases, local indigenous authorities didn’t allow peasants living on their collective land to become involved with the programme. In either case, to remain in the programme and receive benefits, peasants had to rent a plot of land outside the indigenous reserve. Despite the costs of this (an average rent amounts to approximately 40% of a minimum wage) some peasants rented new land, but even so, never received their payments for productive projects.

PNIS did not solve (or plan to solve) old land conflicts and tensions before signing crop substitution agreements, exacerbating both mistrust of the Colombian government and land use conflicts. In some cases, peasants claim that the delimitation of indigenous reserves and forest reserves did not consider the presence of diverse communities and land uses. In other cases, peasants do not recognize the presence of indigenous people in legally constituted indigenous reserves.

Challenge # 2:  Unexpected requirements to remain in the programme for peasants living inside Forest Reserves

Years after peasants signed voluntary agreements to become involved with the PNIS, new requirements to solve land use overlaps with conservation areas were developed.  For example, mestizo peasants living in forest reserves, are now required to comply with nature conservation agreements and sign land use rights. However, peasants found this unexpected change in the rules to be unacceptable, claiming that official delimitations of the forest reserve area are not clear (See map 2). With current regulations, peasants in Type A forest reserves (areas with restricted productive uses) must replace their usual activity of cattle ranching with conservation activities, while those living in Type B Forest reserves (areas with more flexible uses) must engage in agro-sustainable cattle ranching. In any other case, peasants need to rent land outside these protected areas. Current regulations also forbid the construction of roads and infrastructure development within forest reserve areas. According to the peasants, in these conditions, cattle ranching is one of the few economic alternatives to coca since no other productive activity is economically profitable with the current roads.

Some ethnic communities enrolled in the PNIS have not received any of the benefits due to the absence of a differential ethnic approach. This is the case of Nukak indigenous groups in Guaviare. Forced into new sedentary livelihoods due to displacement by armed conflict and territorial disputes, they have adopted coca harvesting as their main livelihood activity. The implementation of PNIS with a differential approach requires prior consultation with indigenous communities, but it is unclear at what level this prior consultation should occur: settlement, ethnic group or ethnic associations. Other important obstacles – including language barriers, and varying political and social organization within each ethnic group – lead to many unanswered questions. Should substitution agreements be developed collectively or individually? How should technical assistance or productive projects be developed? For example, for Nasa communities in Putumayo, productive projects should be aligned with their own productive calendar and with organic and local seeds, and technical assistance must be provided by trained members of their community.

These challenges highlight the lack of a structural and comprehensive approach in the design of the PNIS. The initial focus was to eradicate coca and substitute it with another product but without solving underlying land use tensions.

The current substitution programme needs to recover the trust of former beneficiaries by implementing all the promised components. Further, environmental requirements need to be socialized with local communities.  In Putumayo and Guaviare, for example, conservation activities are not embedded in the culture of peasant coca growers. In their case, they signed voluntary agreements thinking that they would receive support for cattle ranching. As one peasant put it: “if we grow coca, it’s bad, and now if we work in cattle ranching, that is bad too.  What are we supposed to do?” The PNIS needs to provide effective technical assistance to shift preferences for more sustainable activities, while also allowing peasants access to new markets. This implies better institutional coordination with other government organizations in the environmental and agricultural sector to implement programmes in each area, and to develop sustainable alternatives for peasants and ethnic communities. Alternative development programmes need to clarify land property rights and solve land use conflicts as a first step, before signing substitution agreements with communities. The requirements for each SMZ should be designed and socialized at the beginning of the programmes. Otherwise, new interventions can bring more tensions, rather than provide tailor-made solutions for each specific context.

We thank Lucas Marin and Juan José Quintero for their help in the implementation of the workshops and conducting interviews; and VisoMutop, especially Pedro Arenas, for support on developing the field work of this project.

Credits to Juan José Quintero for all the maps in this blog.