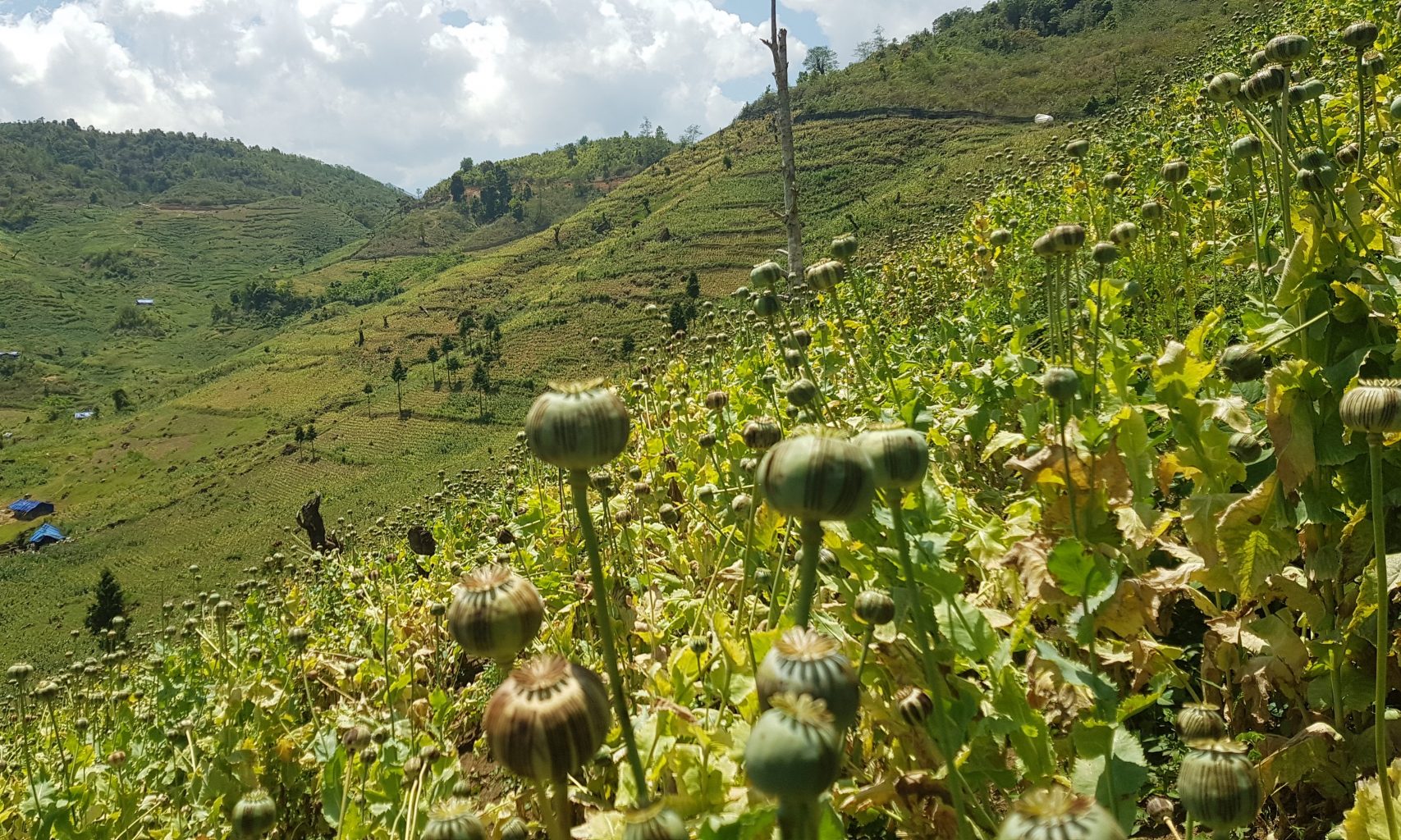 By Nicholas Thomson and Patrick Meehan

In Myanmar’s conflict-affected borderlands, there is one constant that links almost all stakeholders in some way: illicit drugs and the revenues derived from them.

When it comes to narratives around drugs in Myanmar, however, there is often a tension between the ‘theatre’ of drugs interventions, and the lived experiences of people caught up with or connected to drugs issues.

A new working paper, written before the military coup of February 2021, explores these narratives in depth by analysing the stakeholders engaged in: national and legal policy frameworks around the production, trafficking and use of drugs; drugs and health; drugs, rural livelihoods and alternative development; and drugs and peacebuilding.

Here we present five considerations that emerge from this stakeholder analysis for international actors trying to engage with drugs issues in Myanmar.

1. There are significant tensions between drug production and drug use.

Drug production is central to the livelihoods of the rural poor in Myanmar’s borderlands. For some, drug cultivation is driven by long-standing marginalisation. For others, it is driven by new forms of livelihood insecurity and precarity that have emerged as a result of borderland development schemes.

At the same time, drug use is driving new forms of risk, vulnerability, public health crises and social conflict, creating a complex set of challenges.

2. Domestic drugs policy and practice is rife with disconnects and contradictions.

The drug economy has a long history in Myanmar’s borderlands and is deeply embedded in rural power structures. All conflict parties are in some way involved. Drugs have been rooted in efforts to finance armed conflict and counter-insurgency, as well as to shore up informal political arrangements aimed at stabilising conflict.

The deep integration of drugs in borderland economies makes it very difficult to disentangle legal and illegal economies at both sub-national and national level.

Drugs have been central to flourishing cross-border economies and are also important sources of investment in the national economy. Drug commodities involve the same actors and move though the same trade networks as legal commodities. As a result, illegal drug revenues have also become an important source of capital in the formal economy.

Against this background, a wide range of stakeholders – international, national and sub-national – engage with drug issues, giving rise to a complex set of narratives that are often at odds with each other.

3. Drugs are a low political priority for government in the borderlands, but not for local populations, who view drugs as a major issue.

Tackling drugs in the country’s borderlands has been a lower concern for the Myanmar military – the de facto authority throughout the country’s contested borderlands – than state-building, counter-insurgency, resource extraction and trade.

Drugs have often been integrated into these wider agendas. For example, through tolerance of illegal revenue flows into both the national economy and under-funded local administrations, and to the off-budget revenue of army-backed militias.

At a sub-national level, there are major concerns about the rise of harmful drug use, which for several decades have been a major driver of the country’s HIV epidemic.

There is also strong resentment towards the impunity afforded to politically connected major players in the drug trade, while policing on drug issues tends to target small-scale users and sellers – leading to people serving long prison sentences for minor offences.

Drug narratives are also suffused with wider grievance narratives around the neglect and exploitation of non-Bamar ethnic nationality populations, to the point that worsening levels of drug harms among these populations are viewed in some popular narratives as an intentional military strategy.

A case in point is the spread of drug use under the 17-year ceasefire in Kachin State, where such popular narratives are embedded in the rise of local anti-drug activities, especially the Church-based Pat Jasan movement. This significant development in the drug landscape in Myanmar has been highly controversial – critical as it is of both national and international responses to drug issues.

4. The most influential actors shaping the drug economy are the hardest for international actors to interact with and influence.

At the national level, Myanmar military elites – concerned with preserving national sovereignty – have long been determined to resist external engagement on issues that they see as domestic.

Other stakeholders – such as Western governments and international NGOs – are much easier to engage, but they themselves are grappling with the challenges of how to have an influence on drug issues.

Aid and diplomacy are also relatively weak levers for external influence. Aid dependency is low and the government has rigidly resisted external involvement in the country’s peace process.

These factors have limited the policy space for external engagement on sensitive domestic issues like drugs. Government narratives about external actors wishing to engage with the country’s drug challenges have often focused on curbing demand for drugs and the supply of precursor chemicals.

International focus on drug issues in Myanmar has shifted in recent decades as a result of the fact that few of Myanmar’s drugs now reach US and western markets, with the majority going east to China, Southeast Asia and Australasia. China is now the dominant actor in terms of international pressures on drugs production, trafficking and conflict.

However, there has been increased engagement by multilateral agencies and international non-governmental organisations in response to the health implications of drug use in Myanmar. For example, multilaterals fund national harm reduction programmes, which are predominantly implemented by international NGOs.

There was also space for external engagement in the process of the national government revising its drugs legislation, resulting in an amended National Narcotics Law and a National Drugs Policy in 2018. Although international influence shaped an intent to foreground individual and public health as central pillars of a new approach to drugs, the new law fell short of abolishing harsh penalties for drug possession, which in turn rendered much of the language in the new drug policy rhetorical in implementation.

There is a huge local need for more education on the issues surrounding drugs issues, to address stigma and drug-related harms, and inform more inclusive and effective responses.

At the same time, for locally supported solutions to emerge, there is a need for external programmes to engage more deeply with local narratives, attitudes and beliefs around drugs.

Despite hopes that the peace process would open up space to address drugs, there was an absence of discussions around narcotics in the negotiations. Particularly against the backdrop of the February 2021 coup, space to include drugs in a negotiated peace may now be closed.