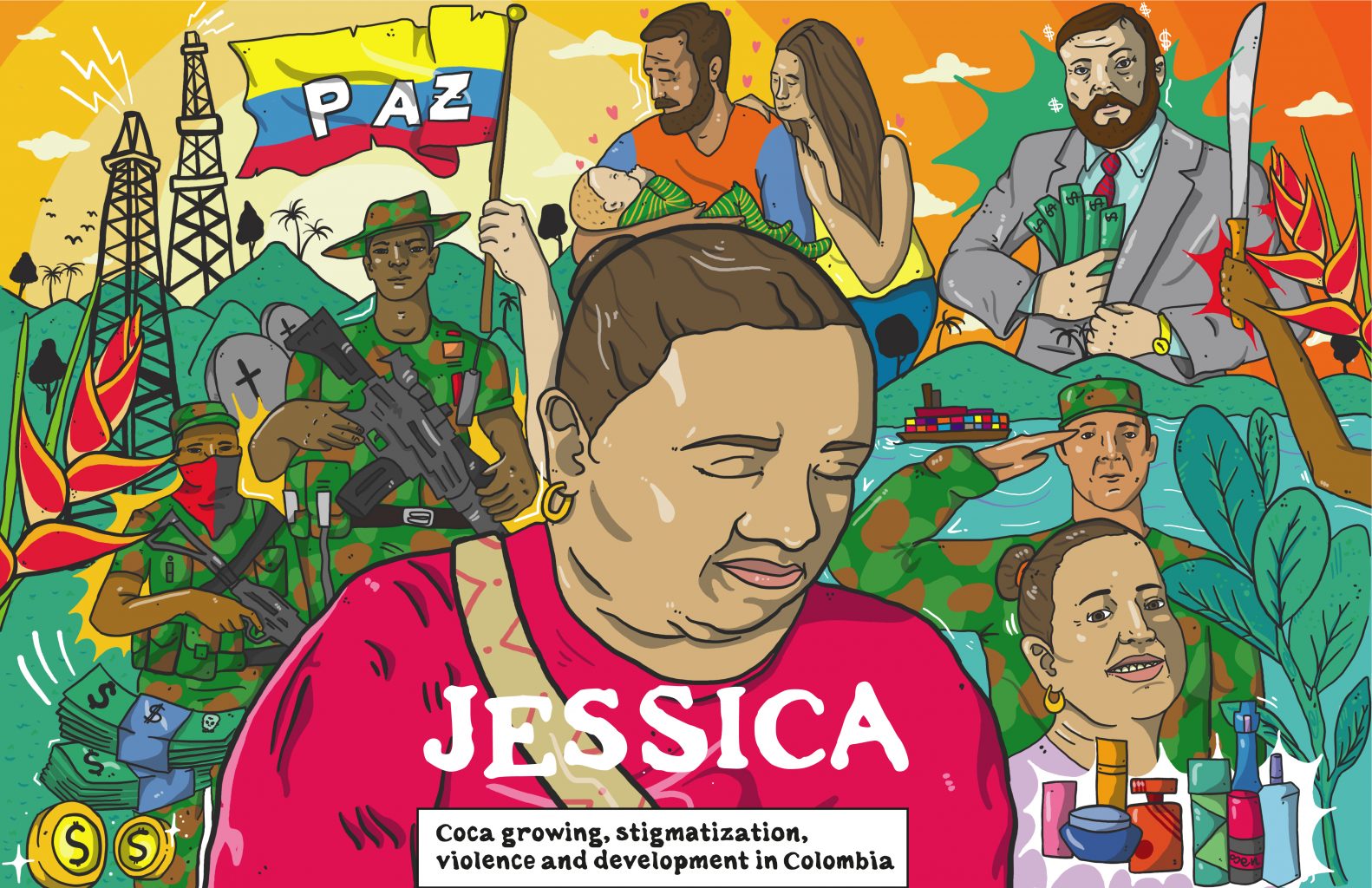 Jessica is a social leader from Putumayo on Colombia’s southern border with Ecuador. Her story spotlights the stigmatisation and violence associated with coca farming, as well as the welfare benefits and development it brings to families and communities – it’s a story of hardship, resilience and tough trade-offs.

Four years after Colombia signed a peace deal with the FARC and violence is still part of everyday life in the country’s borderlands. Killings of women engaged in community organising and human rights defence in Colombia, like Jessica, increased nearly 50{83ecf5b61c3deac6f8cdad8e1c8bee36d10ac3107192903d905d6fe2d4e88cad} in 2019. This escalation  of conflict has halted structural transformation that social leaders have been working for decades to build.

In the 1980s, Jessica’s first coca harvest gave her family enough money to pay its electricity bill and buy a TV.

There was little government presence in the region. Different guerrilla groups arrived. Among them, the Movement 19 April (M-19) and the Revolutionary Armed Forces of Colombia (FARC), who took a tax on coca profits. Some of this was used to organise community workdays to fix roads and build schools.

Jessica was elected community police inspector under FARC approval. As she raised her two children and served her community, she saw people suffer the hardships of poverty. She also rejoiced when money earned through coca farming helped them send their children to university, or maintain their homes.

But life was hard, and money earned by coca brought with it risk and violence, dealing with those involved in the illicit drug trade.

In the 1990s, coca production increased and Putumayo developed quickly. Then the state started aerial spraying farms with glyphosate, destroying not only coca but also all other crops. Jessica protested alongside coca farming communities.

Violent conflict continued in the region. Right-wing paramilitaries arrived to fulfill their plan of national expansion that had started in northern Colombia in the mid 1990s.

Killings increased. Many coca growers, social leaders and community members died. Jessica was afraid to even go to the shops. She had to temporarily flee the region to survive.

In 2000, Jessica was part of a movement to create a Peasant Reserve Zone – a legal land designation set up by the state to protect  the collective use of farms by campesino families in colonisation regions.

When the FARC found out, they held Jessica at gunpoint, believing that she was betraying them and bringing the army to the region. But one of the armed men was from her community and knew that Jessica was only trying to help. Her life was spared.

In 2002 the Peasant Reserve Zone was declared. Coca production decreased, but it didn’t completely disappear. That same year, Jessica gave up her role as a community police inspector, after receiving yet more death threats.

In 2009, oil companies arrived in Putumayo promising jobs and economic development. But the communities didn’t want this. They wanted to keep their land.

In 2012, talks of peace negotiations between the FARC and the government started. Jessica represented the Peasant Reserve Zone in negotiations, asking for better roads to allow farmers to sell their (non-coca) produce.

In 2016, the peace deal was signed. It included a voluntary illicit crop substitution programme. Jessica has encouraged families and communities to sign up. But most have not received the support promised by the government in exchange for agreeing to stop cultivating coca. And more forced eradication, often violent, is taking place.

Jessica is now in hiding as she continues to receive death threats by illegal armed groups who are competing to take control of drug trafficking routes and social affairs in Putumayo.

1. Coca has brought risks and violence to communities, but it’s also allowed people to overcome the hardships of poverty.

Jessica’s story highlights how the daily lives of coca growing communities are hugely impacted by the presence, actions and interests of different actors coming in and out of the region – each with their own interests and bringing different forms of violence.

The violence and risk associated with illicit crops is probably no surprise. Farmers are vulnerable to assaults by armed groups, with little or no access to institutional recourse. Especially in regions – like Jessica’s – that have experienced years of long and violent conflict between and among different state and non-state groups.

But violence has come from less expected actors too, like the government. 96 incidents of violent clashes between rural communities and state forces linked to forced eradication of coca crop were documented between 2016-2020.

Another unexpected reality highlighted by Jessica’s story is how coca has helped people to overcome the hardships of poverty and actually developed whole regions – creating jobs, boosting local economies, or allowing families to send their children to university. This reality challenges more common narratives of illicit drug economies as always being barriers to development.

2. Coca producers are organised and active citizens who are willing to engage in alternatives to coca production, but they feel let down by the state.

Despite being hugely impacted by the interests of different actors, coca farmers also have strong agency. Jessica’s story shows how community action groups built roads and schools. They protested against the government’s forced eradication policies. And they lobbied for the creation of a Peasant Reserve Zone to protect their land rights.

The National Illicit Crop Substitution Programme (PNIS) – part of the 2016 peace agreement – was designed to counter exclusion of peasant coca producing families. It is also supposed to be tied to local and regional development plans to improve rural infrastructure and access to public services.

Many coca farming families signed up to the agreement. But, so far, the government has not delivered its side of the deal. Nor is it doing anything to protect social leaders, like Jessica, who are working for its implementation within communities.

The Colombian government treats coca farmers like criminals. Counter-narcotics policies are still tied to the narratives of the war on drugs, used to justify a war on peasant farmers who cultivate coca.

The reality is that most coca growing communities don’t have access to basic public services, like drinking water or sanitation systems. Growing coca is not a particularly fast or easy way to make money. It is a hard, labour-intensive agricultural job. Farmers cultivate coca because it offers them a reliable income and modest social advancements, in contrast to other crops, where demand is unreliable, prices fluctuate and transport costs are high.

And so, Colombia’s coca farmers face multiple forms of exclusion – from lack of access to basic services and infrastructure, to high levels of informal land tenure. They are also excluded from public debate – including on counter-narcotics policies. Treated as criminals, the government and civil society don’t recognise them as valid interlocutors.