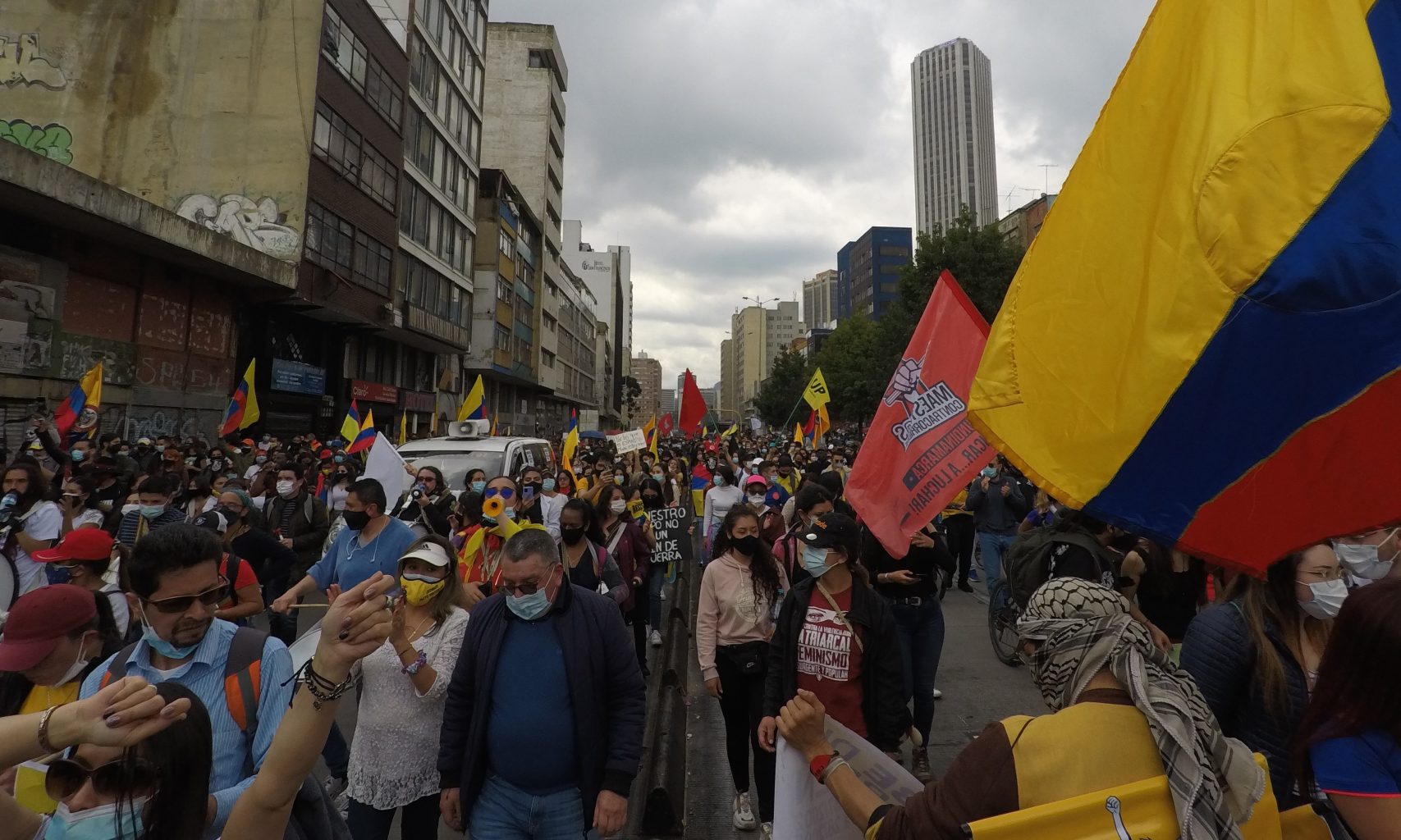 Colombia is in its fourth week of a National Strike, in protest against a proposed tax reform. The reform was subsequently dropped but protests continue with widespread reports of police violence and abuse. The strike committee has proposed a long list of demands. Among these is the full implementation of the 2016 peace agreement by the government – including its illicit crop substitution programme – and the halting of a return to aerial spraying of glyphosate to kill coca crops. Meanwhile, the Colombian government has tried to shift focus to violence against the police and property, and the alleged infiltration in the protests by criminal armed groups involved in the drug trade.

The links between drug trafficking, the war on drugs, and the political system in Colombia are thick and complex. A new working paper outlines the regulations, narratives and actors that have designed and implemented drugs policy in Colombia. Here we summarise six defining characteristics of the evolution of Colombia’s drugs policy, and conclude with two possible entry points for using research to counter the increasingly hard-line tendencies of current policy.

1. The war on drugs in Colombia has been closely linked to the counter-insurgency war.

This is perhaps most clearly epitomised by Plan Colombia, the US-funded initiative which focused on strengthening the military capacity of public forces and on aligning the purposes of the counter-insurgency war with those of the counter-narcotics struggle.

2. The Colombian political system is largely democratic and competitive, but anti-drug policymaking is not.

Colombian drug policies have been centralised and opaque. The war on drugs generated two long-standing contrasts within the political system. On one hand, drugs policies have taken a very punitive approach that criminalises coca growers and excludes them from taking part in any decision-making. On the other hand, people higher up in the narco-trafficking value chain have been able to permeate the very same political system that remains closed to coca-growers. In addition, all anti-drugs policy decisions are centralised, while the rural regions that are most affected by illicit drugs and drugs policies have no say.

3. The US government has played a major role in establishing drugs policy standards and rationales.

The undemocratic and centralised nature of drug policymaking in Colombia has been exacerbated by the US influence, which has consistently pushed for forced eradication. The US government has also played a role in orienting agencies, such as the Colombian police, in implementing anti-drugs policy.

4. The 1991 Constitution is rights-based, which means that the judicial system has the duty to uphold citizen rights.

Thus, the Constitution opened the door to judicial decisions in defence of ethnic and peasant populations’ rights that have placed some limits on hard-line policies. For example, the Constitutional Court affirmed that indigenous and Afro communities must be consulted if the government is going to fumigate their territories.

5. The 2016 Peace Accord between the FARC-EP and the Santos government introduced important changes to drug policy.

The tensions outlined above led to the inclusion of point four of the 2016 Peace Accord, which advocates for a development-oriented and participatory approach to drug control, and for voluntary coca eradication through a crop substitution programme. Nonetheless, the Peace Accord also maintained elements of the historic, war-like approach to counter-narcotics, allowing the state to reintroduce arial fumigations as a last resort if voluntary substitution is not possible or does not work.

6. The implementation of the new aspects of drug policy included in the Peace Accord has encountered many obstacles.

The President and coalition elected in 2018 has failed to implement the illicit crop substitution programme (PNIS). The failure of PNIS is well documented, by, among others, the UN Office on Drugs and Crime, with huge delays, poor communication with farmers and subsidies that never arrived. The current government is on the brink of re-activating aerial fumigations.

As noted above, two processes that have allowed for changes to the closed decision-making around drug policy (that is isolated from the preferences and needs of Colombian citizens) are the 1991 constitution and the 2016 peace agreement.

In terms of political incidence, legal strategies have been fundamental – in particular the judicial activism undertaken by different human rights organisations to denounce the abuses of forced eradication. As part of the Drugs & (dis)order project, the National University research team in Bogota has been applying a series of legal actions in order to protect the rights of the users of the PNIS; this is being undertaken with peasant, afro and indigenous organisations such as COCCAM. Similarly, we have participated in some actions that currently seek to stop manual forced eradication.

Thus, we propose that reinforcing judicial strategies and continued documentation of and advocacy for the implementation of the 2016 Peace Accord constitute two open windows for research-based engagement in opposition to the centralised and exclusionary nature of public policy on drugs.

This blog has been adapted from the working paper An analysis of Colombia’s drug policy and actors, with input and editorial support from Frances Thomson, Karen Brock and Louise Ball.