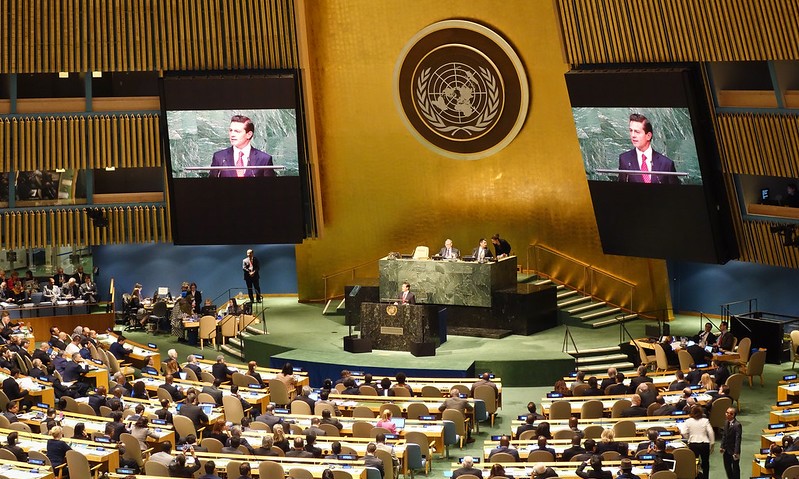 Most, if not all, decision makers profess to evidence-based policymaking. The UK government’s What Works Network emphasises that good public policy decisions are informed by the best available evidence. If evidence is not available, ‘decision makers should use high quality methods to find out what works’.

Sadly, however, evidence-based policymaking often seems to be the exception rather than the rule. A political slogan, observed only when convenient.

Take the field of drug policy, where I have spent many years working as a researcher and NGO policy adviser trying to make sense of drugs policies and the paths they take – I have observed that decisions are often made despite the evidence.

Recall June 1998: the United Nations General Assembly (UNGA) endorsed a 10-year Action Plan for a ‘drugs-free world’ that led to intensified eradication of illicit crops, despite evidence published in a 1995 six-volume UN study that found illicit drug consumption problems were unlikely to be solved ‘by continuing or intensifying existing supply-suppression strategies.’ Moreover, the study famously warned about the unintended consequences of forceful supply-side suppression – a case of the cure becoming worse than the disease.

As predicted, the rush to a ‘drugs-free world’ not only triggered massive human rights abuses in the decade that followed, it also failed to reduce supply. By 2018, opium and coca yields were at the highest levels ever since monitoring started.

I am not saying that all policymakers deliberately ignore the evidence. In my years working in this field, I’ve met many policymakers who are well-intentioned and committed to following ‘what works’.

Nevertheless, evidence gets ignored or delegitimised for two reasons: first, as Paul Cairney writes in The Politics of Evidence-Based Policy Making, ‘there is just too much evidence out there for anyone to consider’. This leads to either policy impasse or partisan wrangling. Second, sometimes a politics emerges that enforces a dominant narrative or version of what constitutes ‘good’ or ‘bad’ evidence.

Responding to how evidence gets ignored or delegitimised

Recently, I was involved in the first cycle of an ongoing Policy Lab initiated by the Drugs & (dis)order research project, which is working to build a new evidence base on war-to-peace transitions in the drug-affected borderlands of Afghanistan, Colombia and Myanmar.

On the one hand, the project has invested in developing its methodology, producing high-quality evidence on the political economy of drugs-affected borderlands. On the other hand, it recognises that when it comes to drugs policy it’s not just about the quality of evidence that determines what is accepted or not, it’s also about the politics of drugs policy processes.

A ‘laboratory’ invokes the notion of a space where experiments can be made or in which innovations can be tested. From what I’ve seen so far, the Policy Lab has three key features.

First, it involves sustained engagement over a series of meetings, held in two cycles over the course of a year (rather than the usual one-off workshops or webinars), and therefore requires more commitment from participants.

Second, the Policy Lab introduced the idea of a policy trilemma. The trilemma asserts that sustainable solutions to the ‘drug problem’ can only be found by considering the connections between the drugs, development and peacebuilding policy fields. This means moving beyond seeing them as separate and disconnected, but also recognising the tensions and trade-offs involved – all good things do not go together.

Third, and most importantly, it is a space for having honest conversations. New approaches were sounded out, doubts and criticisms constructively raised, and confidential issues or data analysed, without reputational or operational risks for those involved.

Another advantage I see to the Policy Lab approach is that it attempts to move beyond traditional research uptake work. As Hilhorst, Swartz, and Celeen write, research communication should not be seen as an activity done separately from the research itself, and nor should it begin only after research is completed. Communication is not simply about the translation of technical and complex research into a language, format, and context that non-experts can understand. Right at the beginning, fundamental questions need to be asked about who research is intended to reach, at what time, and with which purpose.

Making a difference by asking the right questions

Just as there are fundamental questions that need to be asked throughout the research process, the same is true of policymaking processes. To make a real difference, I believe that the Policy Lab should not simply be a forum in which policymakers and researchers can ask each other ‘what works?’ It should also examine ‘for whom?’

The question ‘what works?’is limited. Unless qualified, it inevitably leads to the ‘temptation of the technical’, or the belief that solutions come from timely doses of capital and technical prowess, while avoiding entanglement in internal politics.

Carothers and de Gramont (2013) write that such beliefs lead to a misunderstanding of the causes of the problem; solutions imposed from outside that lack domestic buy-in or ignore local capacity issues; blindness to how technocratic-rational reforms may threaten powerful domestic interests and thus go nowhere; or failure to anticipate unintended harmful consequences (see the 1998 UNGA push for a ‘drugs-free world’ example up top.)

Furthermore, asking ‘for whom?’ serves to reorient relationships between the sources of knowledge (i.e. researched communities); those transferring the knowledge (i.e. researchers); and the recipients of the transfers (i.e. policymakers). Linda Tuhiwai Smith, a Maori scholar credited for her work on decolonising research, pointed out that when indigenous people themselves become the researchers and not merely the researched, research questions begin to be framed differently, priorities are ranked differently, problems are defined differently, and people participate in the process on different terms.

Perhaps, then, it’s not just about giving policymakers the answers to their questions, but it’s also about helping them ask the right questions, through spaces like the Policy Lab.

The biggest challenge for the Policy Lab in my view is whether it can create a sufficient level of trust and confidence among the participants such that doors are opened for meaningful collaboration.

Policymakers, though protected by their status and institutions to some extent, face political and public pressure of a different sort – the damned-if-you-do, damned-if-you-don’t type that brings its own career, reputational or operational risks.  A ‘lab’ for having honest conversations therefore emerges as an indispensable sounding board.

The Policy Lab brought together a small group of researchers and senior policy stakeholders across the drugs, development, and peacebuilding fields. This enabled active participation and a focus on learning in a ‘safe space’, creating trust and confidence.

Trust between participants gives a sense of confidence to discuss failures and learn from them. The landscape of drugs policy is marked by decisions that have caused acute political embarrassment, including decisions that have had deadly outcomes. Safety and trust are essential for a careful process of assessment to distil valuable lessons from actual experience and find ways of doing things differently next time.

Developing trust among people with strong views and sometimes fundamental disagreements may still be managed in a way that leads to collaboration. The first step towards doing this has already been explained – asking the right questions.

A next step, drawing on the work of anthropologist Anna Tsing – seeks to ‘listen politically’ so as to allow differnce and create ‘disturbance’. This disturbance may in fact, Tsing argues, be ‘the node in which many beginnings lie in wait’. When differences are allowed, rather than papered over or ignored, traces of ‘not-yet-articulated common agendas’ may emerge.

In sum, the Policy Lab could be a practice that may: help break the policy impasse created by an overload of evidence. Enable analysis beyond the limits prescribed by dominant versions of what is ‘good’ or ‘bad’. Help policymakers to ask the right questions rather than being spoon-fed with ‘the best possible evidence’. Expand safe spaces for honest conversations and provide a useful, confidential sounding board. And open doors to collaboration despite fundamental disagreements.

Thus, in my view, the Policy Lab can help us to move beyond the political slogan and further debates on what constitutes good public policy decision-making in meaningful way.