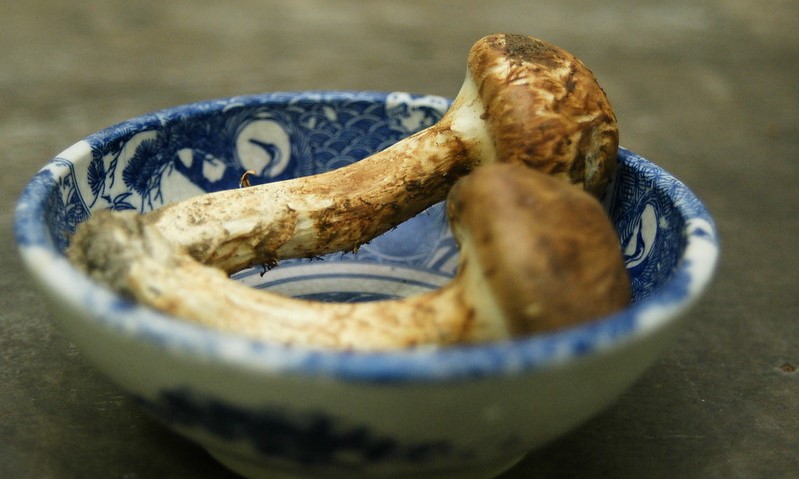 The book Mushrooms at the End of the World: On the Possibility of Life in Capitalist Ruins captured my attention because of the way the subtitle hints at possibilities for positive change amidst deterioration and breakdown. And indeed, mushrooms do have an uncanny ability to grow in decaying places. So, how does the author, anthropologist Anna Tsing, deploy mushrooms as a metaphor for how life may regrow in capitalist ruins?

I imagine ‘capitalist ruins’ to be rustbelts and urban ghettos, or dusty fields with broken tractors – previously prosperous landscapes with stable jobs or bountiful harvests that have now become breeding grounds for populism, right-wing militias, and criminal enterprise.

Given my own research, I also imagine the conflict-affected, typically state-abandoned, and economically-marginalised borderlands, where the illicit cultivation of opium and coca has become a principal means of survival.

It quickly becomes evident that Tsing’s way of storytelling is different. She alerts readers to this, warning us that she is not ‘building a logical machine’ but rather an ‘open-ended assemblage that is made up of many different patches.’

These patches are sometimes interconnected, sometimes autonomous. But together they account for what’s alive in the world despite the mess capitalism made of it. She uses the qualifier ‘polyphonic’ to describe this assemblage – like a polyphony of music in which autonomous melodies intertwine.

The book is based on anthropological field work in Oregon (US), Japan, and Yunnan (China) from 2004 to 2011 tracking the origins and commerce of the matsutake mushroom – an expensive and prized delicacy in Japan.

Tsing examines why matsutake cannot be mass-produced, like sugar or bananas. It is, we learn, because matsutake emerge in relation to dynamic forest landscapes – it is never self-contained. For example, Tsing describes abandoned industrial tree plantations in Oregon in which the abandonment created conditions for the emergence of invasive pine forests aided by the mushrooms that grow in its root systems breaking down poor soil and even rocks into nutrients that sustain the tree.

The ruins of the tree plantations are now a rich source of matsutake pickings. Attempts to grow matsutake as a mass commodity may have failed because people focused only on the mushrooms, and not on the landscapes and the people in it.

But Tsing points out that changing landscapes and the movement of people within it could not be predetermined with certainty either. Humans cannot control matsutake. It depends on more-than-human natural processes.

Related to this is what Tsing calls ‘disturbance’ – a change in environmental conditions that alters an ecosystem, often connected with damage. But disturbance, she says, is not always bad. It is both coordination and history, because human-disturbed landscapes are ideal spaces for examining what went on and what role nonhuman participants, like mushrooms, played. This is why, for example, the satayoma projects in Japan use ‘controlled disturbance’ to open up forests for mushroom growth, very much in contrast to the attempts to mass-produce matsutake like sugar or bananas.

Along the matsutake supply chain, we meet foragers and pickers in Oregon’s forests, who are typically white war veterans and Southeast Asian refugees. For them, the mushrooms don’t represent wages like those earned by workers in a sugar plantation. Rather they are prizes won from a particular form of freedom of living in and off the wilderness.

Once purchased and packed by intermediaries, the mushrooms turn into inventory, a capitalist commodity. Transported to its consumers in Japan, it undergoes yet another translation into a gift or a social artefact with a power to make personal ties and establish or strengthen reputations, signalling serious commitment between giver and receiver. Hence, most distributors in Japan do not see their roles as capitalist retailers, but as matchmakers between gift and the givers who buy it.

Tsing seeks to study capitalism without the assumption that the future has a single direction: progress. She examines wealth accumulation through histories in which both humans and nonhumans (tress, forests, mushrooms) are resources for investment. She implores us to accept the indeterminacy of outcomes – especially when attempting to fix the precarious livelihoods and precarious environments of the ruins. Precarity, she states, is when the controlled world we thought we had fails. Life in the ruins is life without the promise of stability.

As I read, I am once again reminded of my research. Life in the conflict and drug-affected borderlands is one of radical uncertainty – life without promise of stability as Tsing describes. And here we also see the ‘polyphonic’ assemblage – or entanglement – of licit and illicit economies, of conflict and development in the everyday lives and communities of the borderland.

I think of the numerous failed attempts to introduce substitute crops for opium and coca. Could those failures be partly attributed to how attention was focused only on substitute and substituted crops, and not on the landscapes and polyphonic currents that sustain their emergence? Were certain patches in the assemblages involved – for instance ownership of land, agricultural credit, or protection from predatory local actors – overlooked?

Tsing introduces us to many new concepts that challenge our conventional ways of viewing the world. One of these is ‘pericapitalism’, used to describe the ruins as sites of salvage that are simultaneously outside and inside capitalism.

Pericapitalism involves ‘translation’: the mushroom transforms from a prize (won in freedom) to a commodity (alienated with no connection to the forest from which it emerged or the forager who plucked it) and into gifts (that may be of no value to others but hugely symbolic to those it connects).

Further questions emerge: should drug lords be better regarded as pericapitalists who are simultaneously licit and illicit entrepreneurs, predators to some but protector to others, sources of both order and disorder? Are illicit opium and coca products not only illegal commodities, but also social artefacts that establish relations between its poor growers displaced from the mainstream economy by the increasing concentration of wealth, and powerful pericapitalists who fill in roles in the absence of the state? Are illicit crops sometimes a counter-current to that concentration of wealth?

For me, one of the most significant contributions of the book for policymakers and researchers struggling with uncertain policy decisions to tackle illicit drugs economies is Tsing’s notion of indeterminacy. For Tsing, indeterminacy is not the end of history, but rather a node in which many beginnings lie in wait.

Accepting indeterminacy does not mean ignoring or papering over unresolved issues. Rather, it is more about what Tsing calls ‘listening politically’. That is, enabling a practice of translation that does not attempt to resolve differences on autopilot, but rather that allows difference to disturb.

It is through this disturbance that traces of ‘not-yet-articulated common agendas’ may be detected. The key point here is that livelihoods and ways of life develop through both coordination and disturbance, and especially in the ruins.

In the drugs policy field, which sometimes feels like an ideological battleground, accepting and embracing disturbance in a coordinated way (like the ‘controlled disturbance’ of the satayoma projects in Japan) may allow us to ask tough questions, ask the right questions, to find some common ground (no matter how thin, spotty or unstable it is), and to aim for the best imperfect policy decisions we can.

There’s one final contribution from Tsing’s work that I’d like to share, that builds on listening politically: the art of noticing. As social scientists we tend to rely on the same trusted sources: archives, diaries, ethnographies, and various other research reports. The art of noticing that Tsing practices also examines the tracks and traces of mushroom spores, pine trees, and forests – because they too contribute to our landscapes and are part of the polyphony.

Most importantly, the art of noticing is not simply about combing through the mess of existing worlds. It is also about avoiding the search for scalable applicable-for-all principles, laws, or formulas. Scalability, she says, banishes meaningful diversity that might change things.

Tsing’s methodology, therefore, is to me the book’s most important contribution. It succeeds in provoking a rethinking about how to investigate and approach entangled ways of life as they arrange and rearrange in coordination and disturbance.

Is this the approach we need to investigate the entanglement of illicit drug economies in conflict-affected borderlands?